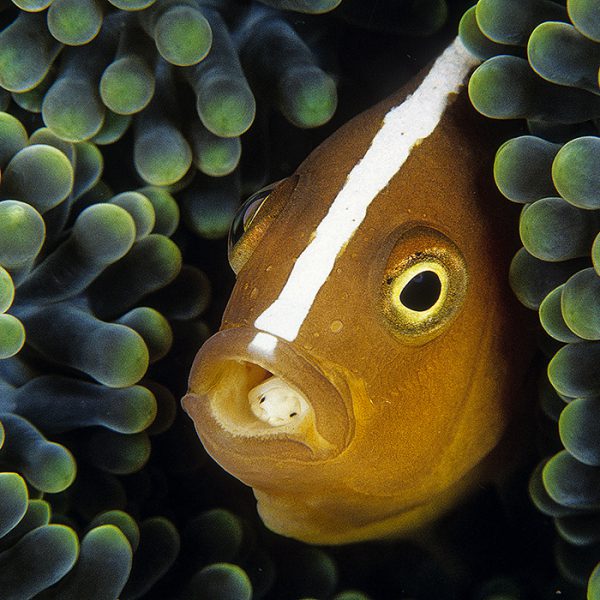 Parasitic isopod (Cymothoa exigua) that has consumed the toung of this clownfish and installed itself as a permanent resident. This crustacean is known as the Tongue-eating Louse and will attack many species of marine fishes.

Aquarium Invertebrates: the good, the bad, and occasionally the horrific

We can think of marine invertebrates as the wild cards in keeping a modern reef aquarium. Some come in as ticketed arrivals: the ornamental cleaner shrimps, the algae-grazing Scarlet Hermit Crabs, the stunning Blood Fire Shrimp, the delicate and prized Periclimenes anemone shrimps, and so many more: eef lobsters, sea urchins, starfish, clams, scallops, flamboyant feather dusters…the list goes on.

But there are also the stowaways slip into our tanks, lurking on or within our live rock and substrates, new coral colonies, clumps of macroalgae, or even clinging to incoming fishes. Some will grow and flourish, sometimes to our delight, occasionally to our dismay or even horror.

CORAL’s resident expert on such subjects, Dr. Ron Shimek, recently recounted his own surprise at the array of living surprises that turn up in reef aquaria:

“In a younger world, being a professional invertebrate zoologist, I wanted to learn about the variety of critters hitchhiking into our reef tanks. As a result, for about 10 years, I had online columns where I regularly answered hobbyist questions concerning any strange critters appearing in their aquariums. Based on those questions, it was obvious that hobbyists were finding many isopod hitchhikers from a lot of different isopod groups. This took me somewhat by surprise. I expected aquarists would report discovering a lot of isopods, but I did not anticipate the wide diversity that was found.”

“Many isopod hitchhikers,” he continued, “are free-living, harmless or even beneficial to their reef-tank neighbors, similar to their distant cousins, the amphipods. Unlike amphipods, however, a few of the isopod hitchhikers had the potential to be disastrous if they were not removed from a reef aquarium very soon after their arrival. These isopods are from taxonomic groups containing many species of scavengers, but also some impressive predators and fairly nasty parasites. I need to point out, as well, that most scavengers are also predators as well as vice versa.”

Ron went on to share an introduction to some truly horrific crustaceans, including species that will attack humans and one that is truly fearsome: the Giant Isopod, Bathynomus giganteus, a heavily armored bottom-dweller growing to reported lengths of up to a meter (39 inches).

By some estimates, there may be 30 million or more invertebrate species on Earth, most still unknown, and including some of the most fascinating, beautiful, and sometimes deadly animals in the sea. They are well worth knowing, and if you have a reef aquarium, you have invertebrates, perhaps some you have yet to discover.

With this issue, a number of CORAL contributors commence a series of articles on motile aquarium invertebrates, the first up being subphylum Crustacea. As always, your comments and suggestions are most welcome.