Our History and Vision

In 1999, noted German natural history publisher Matthias Schmidt invited marine aquarist and author Daniel Knop to join with him in creating a new and very different type of aquarium magazine. They set out to combine hands-on, cutting-edge aquarium advice with definitive and lavishly illustrated reports on reef species, coral reefs in the wild, environmental issues, and field trips to tropical destinations. From the beginning, they were determined to produce a magazine that would serve a broad spectrum of marine enthusiasts – from beginners to experts and aquarium professionals. 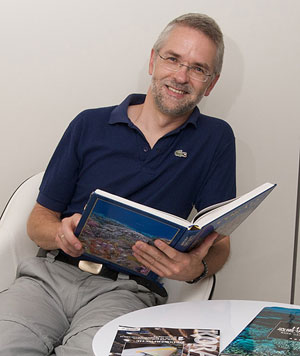 With the guidance and involvement a team of pioneering reefkeepers and international marine biologists, Koralle was launched by Matthias’ highly acclaimed publishing house Natur und Tier-Verlag in Muenster, Germany. In its first 10 years, the magazine has won accolades and enduring respect for the quality of its content, its production values, and its ability to bring together as contributors the leading marine aquarists and reef biology experts from North America, Europe, Australia, and many other far-flung places. As Editor of Koralle, Daniel Knop, above, has developed a worldwide following among both marine aquarium enthusiasts and coral reef researchers. He is one of the few living marine scientists to have a coral genus named in his honor: Knopia, a soft coral similar to the genus Clavularia but genetically distinct.

A World of Knowledge

Launched in 2004, the English-language edition of CORAL appeared with distribution to the United States, Canada, the United Kingdom, Australia, and New Zealand. Other international editions currently serve reef enthusiasts in France, Italy, Poland, Russia, and, of course, Germany. With the able assistance of an advisory board and international group of expert contributors, CORAL prides itself in offering a marine-only, content-driven alternative to most other marine publications currently available to hobbyists. It is a magazine devoted to providing a bridge from the world’s ocean environments to the home marine and reef aquarium, using the finest photographs and latest information from noted marine aquarists and underwater photographers worldwide. 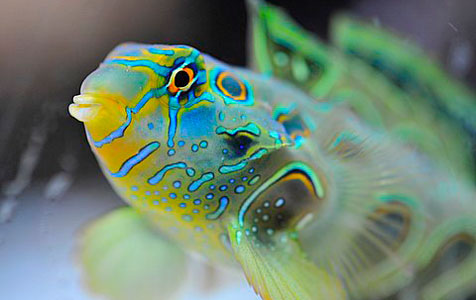 CORAL® is a licensed edition of KORALLE Germany,
ISSN:1556-5769
Natur und Tier Verlag GmbH | Muenster, Germany
All rights reserved. Reproduction of any material from this issue in whole or in part is strictly prohibited. 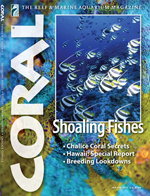 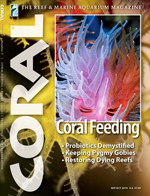 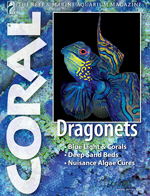 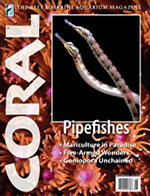 We make subscribing quick and easy, with FREE Shipping and a FULL Money-Back Guarantee. Get one full year with six big bimonthly issues for just $37 to US addresses. International subscriptions with Air Mail delivery are also available. One price includes the award-winning print edition and the FREE CORAL Digital Edition and access to a large Back Issue Archive.